Chobots was an online Flash browser massive multiplayer online game (MMO) set in a virtual world where players could create cartoon alien avatars called "chobots" who resided in floating cities in outer space. Chobots was created, developed, and published by the Ukrainian company Vayersoft LLC, and ran from 2008 until 2011 when the game was shut down. The target audience of Chobots was primarily children and teenagers, though it was marketed as a "family game." Chobots was often compared to other similar contemporary games, including the popular Club Penguin.

In addition to the main version of the Chobots game, which was published in English (though the in-game language could be changed) and available on chobots.com, two separate but licensed versions of the Chobots game were also available to play: a German version available on chobots.de, which was run by German company SpielAffe, and an Indian version on chobots.in, which was run on the Indian gaming website Zapak owned by Indian conglomerate Reliance Group through their subsidiary company Reliance Big Entertainment. Both additional instances of Chobots have also since been shut down.

Although Chobots has since been closed, a number of unofficial and unlicensed recreations of the original game have been hosted on private servers using the Source files created by Vayersoft, which were extracted after a developers credentials were compromised in 2010/2011, causing the original Chobots to be often referred to as chobots.com or simply .com. The largest of these, Chobots.net, or simply .net, gained a significant community with a large player-base and was launched shortly after the original Chobots game closed in 2011 by adolescent and young adult players of the original Chobots game, but was eventually shut down in 2014 due to a dwindling player-base, and a fallout amongst the staff - a pattern seen among many online web browser-based Flash games with a rise in popularity in mobile devices and consoles for children and teenagers. Several Chobots private servers have since been created, one of the most prominent and longest lasting being Chotopia.us (Originally Chobots.cf/Chobots.ws) which shut-down in December 2021. One Private Server is currently running at Chobots.ca 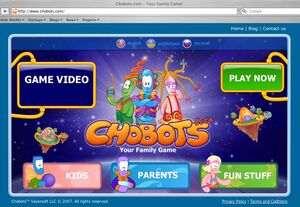 In Chobots, players created accounts with unique usernames and attached to personal email addresses that took the form of cartoon characters called chobots. Players could move their character around with their cursor, and use a text box to chat with other chobots controlled by other players in the form of chat bubbles. Players interacted with one another in different rooms and on unique servers, which appeared in the form of floating city islands in outer space. Players could add each other to their own unique friends lists, which would notify players when their added friend was online or offline and allow them to interact with each other when not in the same immediate room or server, or otherwise teleport to the room that their friend was in.

Players could earn bugs, an in-game currency, to purchase unique items that allowed them to dress up their chobot in various clothing, including hoodies, wigs, T-shirts, pants, shoes, and outfits. Each player also owned a house, which could be upgraded and decorated with various furniture purchased with bugs. Some virtual items directly effected players' characters; for example, hoverboards could make a character fly slightly above the ground and move faster. Players could also purchase virtual pets with bugs, which they could customize, dress up, and nourish through virtual food as well as taking them on "walks" when not at their house. Additionally, players could purchase "magic" items that altered the appearance of their chobot character in some way, or otherwise performed some unique animation across the room, which was visible to other players. Players were also able to purchase and maintain virtual robots, which they could use to duel the robots of other players, leveling up their robot through experience gained, which allowed them to further upgrade their robot. The robots mini-game also maintained a permanent leaderboard with the highest ranking players and their respective robots. Players could earn bugs through a variety of mini-games, some of which were single-player while others were multiplayer co-op or versus, and quests offered by non-player characters (NPCs). 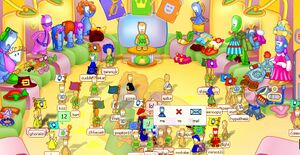 Chobots in the Clothing Store

In addition to bugs, players could also use real-world money to purchase unique upgrades and virtual items in Chobots. Players were able to purchase a subscription to a membership feature, which was called "citizenship," and would in turn make their chobot accounts "citizens." Citizens could purchase more virtual items, draw art on a "citizen wall," had access to an exclusive "citizens only room," and had a unique green chat bubble. Some in-game items were also purchasable only with real-world money.

The Chobots community was moderated by the adult staff of Vayersoft as well as voluntary moderators who were not officially employees of Vayersoft. Vayersoft employees who worked on Chobots were known as moderators, including developers who programmed the scripts that ran the game and designers who created the visual graphics and art of the game. Players in the Chobots community could be recognized for their perceived kindness and knowledge of the Chobots game and community by being promoted to the rank of Agent. Agents were not staff members of the Chobots team, but rather these recognized players who could be relied on for assistance by other players. Potential agents were selected by the Chobots team at Vayersoft based on player recommendations to be put in a poll, which members of the Chobots community voted on as to who should be promoted to Agent. Those who received the most votes were promoted to Agents by the Chobots moderators. Agents had a unique blue chat bubble, could draw on their own wall, and had access to an exclusive agents room, which included a catalog of virtual clothing items that could only be purchased and worn by Agents. Agents who became inactive or otherwise acted rude or unhelpful could be "de-agented" by moderators, removing their rank of Agent. 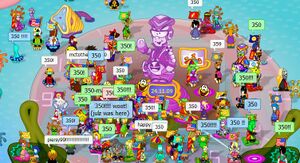 Various events were commonly held in Chobots among the community by the game's moderators, which were communicated both in-game and on the Chobots website's blog. One of these events were "parties," where moderators could perform a large variety of unique animations, which the community referred to as "mod-magic," in a room on a server, as well as give out free virtual items, which the community called "rain," and alter the appearance of the room itself; all of these actions were done on a secret Flash-based "panel" located on kavalok.com, which could only be accessed by Chobots staff members. Another type of event were in-game competitions, or contests, where players could earn experience in a certain mini-game and rank up in a leaderboard table. Winners could win bugs and/or a unique virtual item. Other forms of contests also existed apart from those tied to mini-games, such as drawing contests, recording contests based on videos published online, and other graphical depiction contests.

Sometime between 2010 & 2011, depending on what Vayersoft used for development - a developers Git (Global Information Tracker) or CVS (Concurrent Versions System) details were discovered which lead to different revisions of the Chobots Source to be leaked online in the following years.

During this time, cheating became rampant in the Chobots World and lead to it's eventual closure in August 2011 with 2 final blogposts from Tina & Tovictory.

Hello Everyone, I suppose you saw the post by Tinagothic about chobots being closed, if you didn't you can read it here.

Chobots, the game we played a lot, an overfilled well of memories has been closed. The reason is obvious, third party programs were used and destroyed the game.

However, we can never forget it. Chobots will always take place in our hearts, along with all the people we met and laughed with. Let's look at this video made by Cheweh, brought tears to my eyes..

I regret to inform you that due to hacking attacks Chobots world is closed. We received a technical damage that can't be eliminated at the moment.