Chotopia.us is a private server which began as Chobots.cf in April 2014 and later transitioned to Chobots.ws before finally settling on Chotopia. 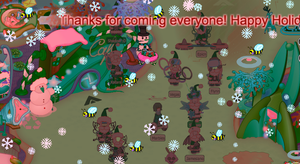 Chobots.cf saw a small but steady growth over the first few months of release, and reached 1000 users in August 2014 & 2000 users in January 2015, it also transitioned to Chobots.ws around this time and continued with the domain for over a year until switching to it's final domain Chotopia.us 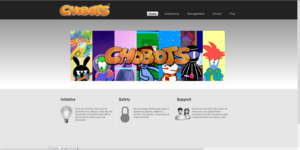 Chotopia has gone through many revisions of it's homepage through-out it's lifetime, and thankfully many images of these homepages are still available to this day on [The Chotopia Blog] & has been archived for preservation, and will be made public once the blog has been taken offline. 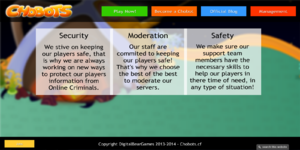 Chobots.cf & Chobots.ws went under 3 total revisions during 2014, the initial website was created using a free template found online (currently searching for source, and will include in resources once found), the second website was created in Flash CS6, and the third was created and launched in November 2014. 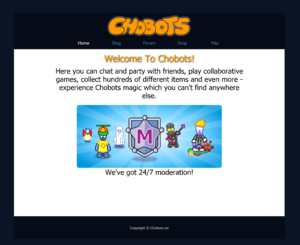 Chobots.ws had its website change a few months after, however there was no blogpost, and [Web Archive]'s backup is broken and doesn't load a stylesheet, however in December of 2015 with the launch of the Chotopia.us domain there was a blog post which included a screenshot of the New and "Final" Website Design, with minor revisions following with the next few years.

Chotopia.us has introduced new features, however the website design is relatively the same as it was since the introduction of the final 2015 revision. As of this current edit, Chotopia.us still remains online for players to login & register too, however the last blog post was created in January 2021 stating farewell to the Chobots World, and no further updates have been communicated.

Over the years, Chotopia has hosted a discord server, forum, events, and parties to engage users in the Community. Chotopia.us does not publish the amount of users it has registered anymore, but it's discord has 434 Members.

Chotopia.us is the longest living Chobots Server to date, and if we had to estimate - the third largest playerbase when compared to Chobots.net and Chobots.com. (the latter being the largest)

Chotopia.us remained online for majority of 2021 - however the blog was last updated in January 2021 with the following.

It is with sadness that we announce the end of Chotopia. You may be aware that support for Flash is ending on the 12th of January and that means Chotopia will more than likely not be able to run anymore.

Chotopia was up for over 6 years, with the entire Chobots history starting in 2008. From then onwards, we made great memories, we laughed, we cried, and overall, we cherished it. We hope that you all continue to cherish the amazing memories you made on Chobots and on Chotopia specifically.

Chobots, to some, was just a fun game to mess around on, and to others it meant so much. We hope that you look back on these times with a smile and remember all the good times you had playing this wonderful game.

On behalf of the Chotopia team, farewell.

Chotopia.us closed it's doors in December 2021.

Created by Shadow, the original staff consisted of Brock, Cake, Curi, Evan, Smurf, Elthomii/E2E2, and a few others who can't be named at the moment (due to forgetting)