Chobots.in was a private server which was officially licensed by Vayersoft LLC to Zapak Digital Entertainment Limited in 2009 and launched in the same year. Chobots.in actually "outlived" the original Chobots.com and closed sometime in 2012. Chobots.in was later re-opened in 2014 however it wasn't by Zapak but a group of individuals. 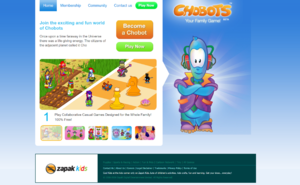 Run on the Indian gaming website Zapak owned by Indian conglomerate Reliance Group through their subsidiary company Reliance Big Entertainment. Chobots.in ran a source from Chobots.com 2009 and never received some of the updates seen on Chobots.com before it's closure in 2011

The Streets of Chobots.in were generally dead, with some players visiting "late at night" for North American players, however shortly after the closure of Chobots.com Chobots.in became the only available Chobots for the Summer of 2011 until Chobots.net opened it's doors in October 2011 and exploded in popularity.

Shortly after the closure of Chobots.com due to the source being leaked as well as the Moderation Panel Chobots.in became plagued with "Hackers" which ruined the experience of playing Chobots - Many users would have accounts deleted, and would have to re-register. However, these deletion was only selected in the Moderation Panel which meant the username would not be available for registration again.

Chobots.in closed it's doors sometime in 2012, with no clear reason however with the rising popularity of Chobots.net and the compromised security there isn't much to speculate.

The Unlicensed Private Server was ran by Teckon and Monty, and ran for a few months sometime in 2014, the server shutdown and eventually became Chobots.co.uk